On Thursday morning I was set the task of producing a piece of ‘exploratory developmental work’ focusing on an element of an already established artists practice in order to contextualise the materials and processes that I have recently been using in my work. As I have recently been working with the intaglio printing process I decided to look further into the work of John Cage, in particular his print works made at Crown Point press from 1978 – 1992. What interests me most about Cage’s work is the way in which he creates and then uses systems that leave the work up to chance occurrences. With each print Cage handed the decision making of scale, materials, composition and colour, to chance by generating numbers from the Chinese book of wisdom; ‘I Ching’.

This was the element of Cage’s work that I decided to incorporate into my own practice, but I realized that in the two hours that I had it would be far too ambitious to try and create a system as complex as Cage’s, so I started off by deciding that I would use A2 paper, ice and acrylic paint as my materials. I then generated co ordinates using an online random number generator, I had to repeat this 3 times, one to choose the pieces of ice and then twice more to find the co ordinates on the 420x594mm sheet of paper.

After marking up the co ordinates I chose pieces of smashed ice out of a bag at random and matched them up to their given co ordinates on the page. In the first set of randomly generated numbers I set it online so that only 20 numbers from 1-10 would come out so obviously there were repetitions which I had to ignore which did not feel entirely truthful to the whole process so maybe this is something I think about when refining my own system. It also meant that not all the pieces of ice were used because certain numbers didn’t come up. Once the pieces of ice were positioned I placed a small blob of black acrylic paint on top of each one. This decision of using black was also made by me and I’m not sure it was the best choice, it would have been better if I had been restricted to a certain colour as this could have been more visually interesting. 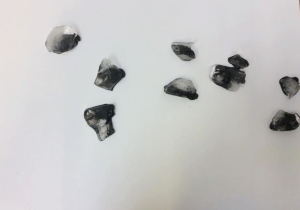 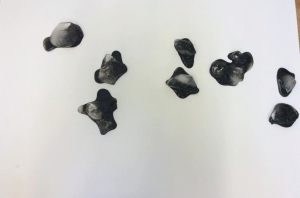 I tried to take photos of the ice melting every 5-10 minutes as first as the piece did transform much quicker as I had expected, as the pieces of ice were so small. I think the first photos where the acrylic paint first touches the ice are most interesting here as the way that the black seeps into the crevices of the small structures highlights the intricacy of each one. It may be interesting to see what would happen if the ice was put back into the freezer at this point. 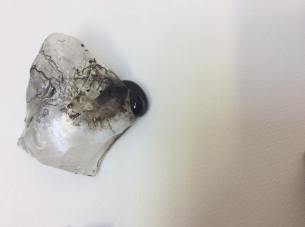 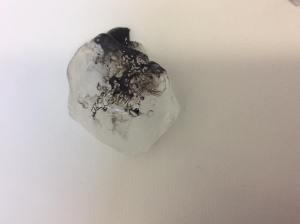 This piece worked as I had expected it to, but I’m not sure if there is anything particularly exciting about it at this point, the fact that the ice has been placed on the page because of randomly generated numbers doesn’t have as much impact as Cage’s work because of the fact that everything else in the composition was chosen and controlled by me. I think for this to be a successful contextualized piece of work I would have to look more into making a system that allows everything in each experiment to be determined by chance. I do still think that combining ice and paint for mark making is an interesting technique that I want to continue with but because this pieces of ice where sat on a piece of paper the marks are not as interesting as on the canvas where the water spilled out and was able to mark it’s surroundings too.

For the contextual studies module of my course I have to write a 2,000 word essay comparing two artists. I have decided to use one of my favourite and one of my least favourite artists for this essay; Ai Weiwei and Banksy. I have decided to use these artists because of my very strong opinions of them both, and I want to analyse the impact that they have on their target audience and culture. Both Ai Weiwei and Banksy create art in order to make political statements usually opposing the government. Although they are both from completely different cultures and create artwork in different mediums, the aims of their works share similarities. Where Banksy forced himself into fame using street art and actually sneaking some of his work into galleries, similarly Ai took no caution and came into the world wide public eye when he was imprisoned by the Chinese government in 2010. Ai is not only viewed as an artist, but also as a political activist, which I believe shows the undeniable power of his work. He has commented that ‘Modern Chinese cultural history is one that scorns the value of the individual; it is a history of suppressing humanity and spirituality.’ From this quote alone you can understand why Ai’s work is so important to Chinese culture as change is vital in this society, whereas Banksy is known for ‘exposing the many hypocrisies of modern life.’ which in comparison to Ai’s work seems quite insignificant and petty.

One technique that both artists have used is the defacement of cultural artefacts. For example Ai has produced a series of ceramics such as the Han Dynasty Urn with Coca-Cola Logo, in which he destroys a historical artefact that has been dated back to around 206BC, with an iconic branding of the modern era. The way in which he tackles this in a pop art fashion, shows how individualism and traditional techniques have been discontinued to make room for mass production in a culture that seems obsessed with consumerism. 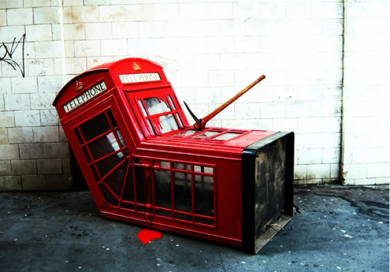 Conceptually this is similar to Banksy’s Vandalised Phone box where he has mutilated the phone box making it totally unusable, much like Ai has done, as he has destroyed a historical artefact that we can assume the state would want to preserve for museums to encourage tourism and therefore profit, so in practice this is an act to get under the governments skin by destroying what they want to preserve. The reaction to Banksy’s piece was much the opposite, a BT spokes person described it as ‘a stunning visual comment on BT’s transformation from an old-fashioned telecommunications company into a modern communications services provider” and reportedly BT requested to keep it in their head quarters. I think this is a prime example of how Banksy’s and Ai’s work differ, although the work was removed, Banksy lives in a culture where freedom of speech and creativity is encouraged, the work was reported on the news as another of his ‘audacious, clandestine pranks.’ This is only a small amount of the research that I have done so far, but currently I am looking forward to completing this essay as analysing artists work is one of my favourite things to do and something I believe to be vital to my own practice.