This film had an interesting plot, but it is more the bizarre visuals, use of perspective and unique camera angles that inspired me most. In particular the cuts that Noe uses throughout the film, which transports the audience via light display or what appears to be Tokyo’s electric system to the next scene instead of blacking in and out. I think if I do experimenting with making films with multiple cuts I should find more interesting ways of linking shots that will add to the viewers anticipation and anxiety. One change of scene that I thought was particularly well done takes place when we are following the backs of the two main characters who are on a rollercoaster, as an audience we get the sensation of being hurtled forward by the ride with all the noises and lights that you would expect to hear and see flashing past you. Once the rollercoaster goes into a tunnel the fairground audio fades slightly and we begin to see a light that we assume to be the end of the tunnel, but as we get closer we realize that it is actually an oncoming car and we are moving at full speed towards it, all of a sudden we find ourselves in the midst of a fatal car crash. The way in which the camera is continuously moving forward at such high speed until this point is effectively what makes this transition so smooth and shocking, helped by the way in which Noe has chosen very similar colour palettes for both scenes. This idea of transforming something pleasant to something disturbing very quickly is something I’d like to experiment with as I think this use of shock would be an effective way of creating anxiety in my audience. Another transition technique that I want to experiment with which takes place when the two main characters are talking and the camera blurs slightly and when the camera restores focus the female lead is carrying on the exact same dialogue and stood in the exact same position with the same costume but the rest of their surroundings have changed. As this is from the lead males memory we can interpret that this is him being unclear about the location of the memory, but I think that this technique of setting up to similar shots but with changes that confuse you as to what you where expecting to see. The hallucinogenic sequences that Noe also chose in transitions between shots were also something that I’d like to experiment with, possibly in a kaleidoscope format but with everyday objects to reiterate the idea that everyday situations, however familiar can seem scary and confusing from the perspective of someone living with a mental illness. Another technique I felt was worth noting was used in the beginning of the film when we are in the perspective of the male lead in such a literal sense that we even experience his blinks. In an article I read in the guardian, the writer described how as he was watching this part he noticed that his blinks where in the same rhythm as the characters. This idea of being able to physically effect the viewer by influencing their basic human need to blink is something I’d love to be able to recreate, as it shows the complete subconscious control that a mental illness can have which turns into a physical action (in this case the viewers blinking, in the metaphoric sense self harm or loosing motivation).

To get some inspiration and direction for my project ‘Pain’ I decided to look at Olafur Eliasson as I realised that the easiest way to create pain in the viewer would be through the use of colour. The most important part of this artists practice to my current project is the way in which he uses colour, in the form of vibrant room lighting to ‘toy with viewers’ perceptions and to probe the nature of seeing.’ I find this concept absolutely fascinating as it means that his audience have a physical experience by viewing his art in the flesh. For example in some of his works he fills a whole room with nothing but neon lights emitting one colour, which results in the viewers vision being physically effected as they stop processing this colour after a while, so once they leave the room the way they perceive colour is different. I think this is very clever as very little artists work has effect on its audience nowadays as it seems that we are immune to being shocked by art but Eliasson’s technique means that the viewer has a physical reaction, whether or not they like the piece or even understand it. He has also caused some of his viewers to have a sensation of seasickness when placing a rotating mirror at an angle from a gallery ceiling. I think (although this is not the meaning of his work) that this is an interesting representation of how far art has gone, as we can no longer be shocked by Gothic novels or gruesome images, only by things that physically make our bodies react. From this interpretation I decided to look further into the psychology of colour, to see what colours would create pain in the viewer subconsciously. From this research I found that surprisingly too much yellow can create feelings of anxiety, depression and even make the viewer suicidal, whereas most people would associate this colour with happiness and positivity. I am now going to do some drawings to decide how I will develop these concepts that I have taken from my research, which I feel has been very beneficial to my project. 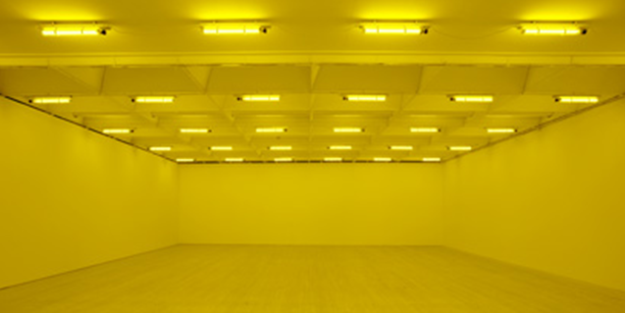 For the contextual studies module of my course I have to write a 2,000 word essay comparing two artists. I have decided to use one of my favourite and one of my least favourite artists for this essay; Ai Weiwei and Banksy. I have decided to use these artists because of my very strong opinions of them both, and I want to analyse the impact that they have on their target audience and culture. Both Ai Weiwei and Banksy create art in order to make political statements usually opposing the government. Although they are both from completely different cultures and create artwork in different mediums, the aims of their works share similarities. Where Banksy forced himself into fame using street art and actually sneaking some of his work into galleries, similarly Ai took no caution and came into the world wide public eye when he was imprisoned by the Chinese government in 2010. Ai is not only viewed as an artist, but also as a political activist, which I believe shows the undeniable power of his work. He has commented that ‘Modern Chinese cultural history is one that scorns the value of the individual; it is a history of suppressing humanity and spirituality.’ From this quote alone you can understand why Ai’s work is so important to Chinese culture as change is vital in this society, whereas Banksy is known for ‘exposing the many hypocrisies of modern life.’ which in comparison to Ai’s work seems quite insignificant and petty.

One technique that both artists have used is the defacement of cultural artefacts. For example Ai has produced a series of ceramics such as the Han Dynasty Urn with Coca-Cola Logo, in which he destroys a historical artefact that has been dated back to around 206BC, with an iconic branding of the modern era. The way in which he tackles this in a pop art fashion, shows how individualism and traditional techniques have been discontinued to make room for mass production in a culture that seems obsessed with consumerism.

Conceptually this is similar to Banksy’s Vandalised Phone box where he has mutilated the phone box making it totally unusable, much like Ai has done, as he has destroyed a historical artefact that we can assume the state would want to preserve for museums to encourage tourism and therefore profit, so in practice this is an act to get under the governments skin by destroying what they want to preserve. The reaction to Banksy’s piece was much the opposite, a BT spokes person described it as ‘a stunning visual comment on BT’s transformation from an old-fashioned telecommunications company into a modern communications services provider” and reportedly BT requested to keep it in their head quarters. I think this is a prime example of how Banksy’s and Ai’s work differ, although the work was removed, Banksy lives in a culture where freedom of speech and creativity is encouraged, the work was reported on the news as another of his ‘audacious, clandestine pranks.’ This is only a small amount of the research that I have done so far, but currently I am looking forward to completing this essay as analysing artists work is one of my favourite things to do and something I believe to be vital to my own practice.